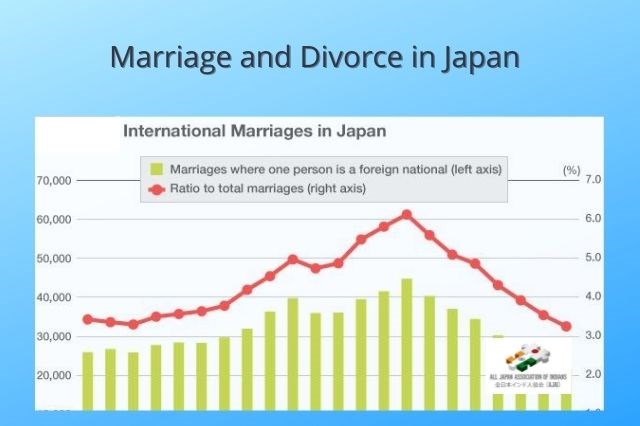 Foreigners and also the Indians are growing in Japan. At this moment of writing this article there are around 40,000 Indians living in Japan and all the foreigners put together have reached approximately 2.9 million. With this increase in the non-Japanese population in Japan, the international marriages in Japan are also increasing. Such marriages can be of the sort, (1) foreigner marrying a foreigner in Japan or (2) a foreigner marrying a Japanese national in Japan. Japanese nationals also include those who have naturalized to take Japanese citizenship.

In Arabia, there is a saying that marriage is like an uncut watermelon. You don’t know if the melon is going to be red or white, unless you cut it. Yes, marriages are like that, irrespective of domestic or international. Hence, the key things to make a marriage successful are (1) to understand the counterpart very well, before the marriage, through whatever possible modes and channels and (2) once married, give each other space and be considerate towards each other. This becomes much more important in international marriages as the two of you would have grown up in totally different cultures, traditions, ideologies, infrastructure and so on having totally different experiences and thus varying thoughts about life and expectations from your partner.

Finding a partner in Japan

As Japan has a very high language and culture barrier, usually a foreigner / Indian living in Japan looks for a Japanese language enabled partner. While non-Japanese community in Japan has reached the mark of 2.9 million as of date, even in the highly populous communities like the Chinese, it is not easy for a Chinese to find a Chinese partner in Japan. Its furthermore difficult for Indians to find a partner living and working in Japan, given the limited Indian population in Japan. Moreover, many Indians strongly believe in the arranged marriage system and hence leave Japan for getting married in India in line with their parent’s wish.

The type (4) and (5) are not so popular in the non-Japanese community yet. This is because, most of the marriage agencies in Japan offer information and services only in Japanese language. Be aware that many fake agencies are just interested in minting money. On the contrary, there are also agencies that train you on various aspects of marriage and taking care of the partner for a successful marriage relation.

By the way, in Japan, if you date someone with an intention to understand that person, do not verbalize your intent to marry unless you really mean it. In the Japanese courts, even a verbal utterance of the word marriage could be regarded as a verbal contract and could land you in trouble.

At All-Japan Association of Indians (AJAI) we are deliberating on the need of a marriage matching function within the Indian community. Indian community in Japan is now sizeable enough and has reached the stage wherein Indians here are looking out for Indian partners living here. We also need to guide the couples on how to make marriages successful.

Every marriage has an ecosystem including parents, siblings, relatives, friends, coworkers, community connects and so on. This ecosystem is always worried about the success of the marriage and happiness of the couples, and extra worried when it comes to an international marriage, as there are too many unknowns.

International marriages do not have great impressions in the minds of people, as they would have heard stories of unsuccessful ones. And when people are conservative, traditional, protective, they are either too careful or against the international marriage.

When a couple decides to go for an international marriage, they need to analyze this ecosystem to take a step-by-step approach to convince all these stakeholders, at least the bare minimum, if not all. Honestly, if the couples are sensible and rational, I think they can decide a lot of things by themselves. Having said that, do not neglect the advice from the seniors. Listen to them or at least show as if you are listening to them.

Marriage ceremony is basically a one-time activity in life. Make it memorial one. Take photographs, videos that will be your life time assets even in thicker and thinner times. Many a times, these memories will keep you bonded.

I would suggest to have small ceremonies in the countries of each couple in their own traditional ways. Don’t make things too big unless you have heaps of wealth. Staying financially stable is a thumb rule in international marriages. You never know when you will need an unforeseen travel or so. The lifelong expenses of an internationally married couple are definitely higher than a domestic couple right from honeymoon, to household things, to child rearing and so on.

Documentation for marrying in Japan

First you need to get a proof of being single (including divorced or widowed) from your motherland, probably from the city office or marriage bureau in the city of your residence in your homeland. If they do not issue such certificate, an affidavit created by your parents, attested by the Notary public of the district concerned can work.

In case of Indians, the affidavit shall be made on a stamp paper of INR 50/100. Authorize the same at the home department of the concerned state (usually located in the Mantralaya / Secretariats) and then get the same to Japan. Now the Indian government also offers online authorization services through the following regional authentication centers (RACs).
Click here

I have handled many cases of fake international marriages in Japan. Fake marriages are of multiple types.

The double kids are found to be with special genetic combinations, like very cute and so on. As of now, good number of double blood kids are taking part in the 2020 Tokyo Olympics.

As the mother and father would have been brought up in different environments, the basic ideas about the upbringing of the kid could be totally or partially different. Some cultures have loads of rituals to be done with the baby whereas some modern cultures may not have any. Hence, there could be debate about right or wrongness of the rituals. In international marriages you will have to take the middle way. Things will be difficult if you try to lean towards one way of thinking.

Kid’s education could be a matter of debate as one parent could be conservative and other could be liberal. Say for example, in India, still many people believe that only Engineering or medical studies are the key to a stable livelihood. As the ultimate goal is the success and happiness of the kid, I would suggest you to look well at your kid to understand his/her inclinations. You need to be objective.

Mind you, double blood kids can find themselves in a cultural or traditional dilemma. Help them for not going into the identity crisis. It would be very tough on the. At school, such kids can undergo discrimination or abuse. So, always keep your antenna on. Stay connected with your kid through daily communication.

The details for schooling and higher education are covered in a distinct article on the subject. Please refer to that article if you need more information.

If an Indian couple is living in India, the two are supported by an ecosystem of parents, grandparents and friends and so on. If they have an issue, they can depend on somebody from this ecosystem, to resolve the issue. However, if the couple moves to overseas, the ecosystem becomes week resulting into higher possibility of household issues. The issues could be (1) verbal abuse (2) physical abuse (3) mental abuse (4) indirect abuse of either the partner or the kids.

In Japan salaries of the IT engineers is high. One very clear issue I am seeing in the community is about the ignorance of the head of the household, usually the husband, towards the family or the reality of life, under the ego of the high income. They start feeling as if they are the boss. This must be stopped.

In case a spouse or a kid is abused in the house, they can reach out to the city office, especially the Child Guidance Center (CGC). Depending on the case, the CGC will offer temporary stay for the kid or/and the spouse. However, let me warn you that, once you go to the CGC/City office, whether you like it or not, they will take actions only as per their rule book. There is no place for emotions in their operations. I have seen cases in which CGC kept the kid/s in their custody for months not allowing both the parents to take the kid/s back home.

Every year I handle tens of hundreds of cases of household issues in the Indian families in Japan. Families are breaking down as incomes rise and houses become bigger. Communication between the family members is reducing. On the other hand, misunderstanding and misinterpretation is increasing. Well, we are becoming more and more judgmental than being accommodative. Whenever an issue is felt in the house, make sure you talk it out and solve it. You may please reach out to All-Japan Association of Indians (AJAI) for help. You may please contact us using the contact details on our website or through Facebook group etc.

Many a times, the couples having issues, come to me after they have resorted on taking help from the lawyers and the law. The lawyers in Japan charge anything between USD 4,500 to USD 7,000 to take a case in their hand and then 20% to 50% cut on the final settlement amount. I request such couples to first come out of the legal battle, as it is of no benefit to either of them, and to settle the things amicably. Sometimes the trust between the two is so much broken that the couples are not ready to come out of the legal battle.

Legal battles in Japan can run for years. Also, Japanese courts do not allow the dual custody of the kids. The full custody is given only to a single parent which in many cases results into abduction of the kids in the sense, the parent with the custody does not allow the other parents to see the kid for months and years.

Having said that, sometimes couples could be a complete mismatch. Their likes-dislikes, hobbies, choices could be totally different. In such case, if the going gets tough, there is no point in compromising the whole life, and I do not mind if the couple decides to separate, amicably, with due respect to each other. It becomes more important if the couple has kid/s. If so, the decisions must be taken in the best interest of the kid/s.

The Child Guidance Offices offer counseling on all matters related to the growth of children and youth, ages 0-18, including:

I have not covered the same-sex or LGBT marriages in this document in the lack of knowledge and research. Please accept my apology for the same. For this, you will have to first find a jurisdiction that allows such kind of marriages and confirm the law/rules of the land.

Yogi (Yogendra Puranik), born in India, is living in Japan for more than 20 years. He is the first elected assemblyman of Indian / Asian origin in Japan. He is a leading volunteer in Indian community in Japan and a thought leader on topics like symbiotic society, education, IT in government etc. He conducts lectures in universities across Japan, ministries, government offices and corporates.