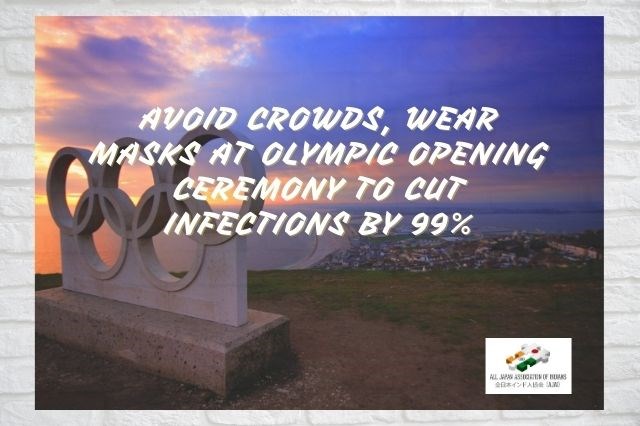 The risk of spreading the coronavirus at the opening ceremony of the Tokyo Olympics could be reduced by 99% if organizers and spectators take thorough measures against it, a research team said Monday, when it released its computer-generated prediction.

The team comprises researchers from the University of Tokyo, Fukushima Medical University and other institutions.

The prediction was based on the assumption of a capacity crowd of 60,000 on hand at the National Stadium for five hours, and that spectators would adhere to seven measures in effect at the facility, including wearing masks and avoiding overcrowding when entering and exiting the premises.

During an epidemic in which 180 new infections per 10 million people are recorded each day, it was assumed that six asymptomatic infected people would enter the venue, and if no measures were taken, the number of new infection cases would increase by 9.6.

However, with measures in effect, the expected number of new cases would be 0.064, thus suppressing the spread of infection.

According to the Tokyo metropolitan government, the average number of new cases this past week was about 300 per day, or about 215 per 10 million people.

It was also assumed that spectators would use concession stands and restrooms, and also consume food and drink while in their seats, which would be equipped with partitions.

Changes in infectiousness because of virus mutation and the preventive capability of vaccinations were not taken into account.

“We also need to be careful about the spread of infection through eating, drinking and traveling before and after the opening ceremony,” said Mitsuyoshi Urashima, a professor of public health at The Jikei University School of Medicine.

Disclaimer: This article is referred from The Yomiuri Shimbun.