History of Indians in Japan by Yogendra Puranik (Yogi) 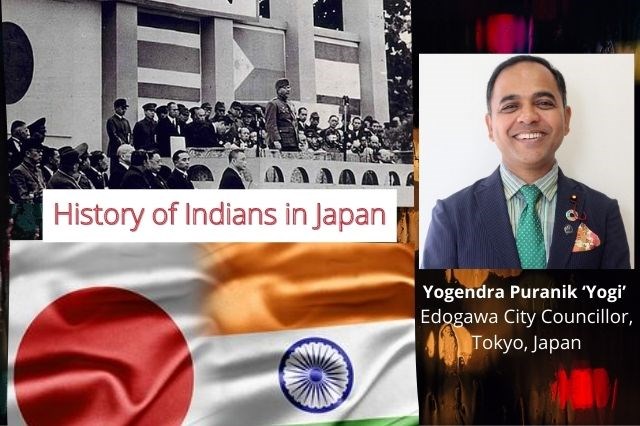 History of Indians in Japan by Yogendra Puranik (Yogi)

Written by Yogendra Puranik, Councillor of Edogawa City in Tokyo, on Sept 7th, 2019

The India-Japan relation started in the 6th century when Hinduism and Buddhism was conveyed to Japan. Bodhisena, an Indian Buddhist scholar and monk, visited Japan in the 7th century, lived here for 25 years and preached Buddhism.  He met the Japanese Emperor and was treated with great honour. Thereafter he stayed in a temple called Daian where he started Kegon school of Buddhism and taught Sanskrit. He participated in the eye-opening ceremony of the giant Buddha statue in Nara Todai temple. Bodhisena laid his bones in Ryoujusen mountain in 760. Records say that thereafter Japanese scholars and monks started visiting India to study at Nalanda University.

The history of modern Indian settlement in Japan starts from 1870s when some Sindhi and Parsi businessmen and their families settled down in Yokohama and Okinawa. Before that few Indians came to Japan on Portuguese boats in the 16th and 17th century and on the British boats in the 18th and 19th century. As per the statistics released by Japanese government, there were 30 Indians in Japan in 1901. Thereafter Indians started settling in Hyogo prefecture. By 1905 there were around 70 Indians in Hyogo prefecture. In the aftermath of the Great Kanto earthquake in 1923, many Indians moved from Yokohama to Kobe.

The Indian population in Japan grew to 632 in 1939 which reduced to 114 in 1942 owing to British sanctions against Japan. The Indian National Army and Japanese army collaboration formed under leadership of R. B. Bose, for achieving Indian independence, is well known. As a part of this collaboration, the INA youngsters joined Japanese military schools for training. However, the whole plan stopped after the sudden disappearance of INA Chief S. C. Bose. After the end of world war, the Indian population in Japan grew again, just to a few hundreds, mainly the businessmen community around Kobe.

India, represented by R. B. Pal, supported Japan in the post-war international court. In 1949, the then Indian prime minister Nehru gifted an elephant to Japan. Thereafter, as Japan became an ally of the US and India of the Soviet Union, India and Indians were not looking east. By 1980 the Indian population in Japan was a bit less than 2000, led by the businessmen community, 40% of which lived in Hyogo prefecture. Kobe was largest port heading towards Asia. In Kobe, places of worship were established during these times.

It was only in the 1990s, when the Indian immigrants to Japan showed a steep increase and that too around Tokyo area. The year 2000 issue of information systems opened the flood gates for Indian IT engineers. For the Japanese, it was just a one-off activity they needed help from the Indian IT industry. However, this gave a realization to some corporates about the usefulness of Indian IT engineers, project managers and business managers. By 2001, the Indian population in Japan was around 10,000.

In the meantime, Indian scholars kept coming to Japan, in very low numbers as compared to neighbouring countries. Even for Indians, Russia, Germany, and later the Americas were the popular destinations. However, during the last few years, as the India and Japan ties have strengthened, the number of scholarships offered to Indian students and vice versa, have significantly increased.

This development has led to change in life styles of the Indians in japan. As compared to a project-based visit to Japan in the past, more Indians are now coming to Japan for long term jobs, along with their families. The Indian community in Tokyo now has more than 1000 school going kids. These kids attend schooling primarily in the Indian and other international schools in and around Tokyo. Education is yet a challenge as Indian parents are looking for better schooling for their kids. Getting admissions into Japanese universities is a further challenge due to the big language barrier. Most of the kids opt to go overseas for their under-graduate and graduate studies.

The change in durations of stay in Japan has also meant a lot of changes in the life styles of people. Many Indians are buying homes in Japan. The number of permanent residency applicants is showing a steep rise over last few years and many are even considering citizenship of Japan. Many IT engineers, girls and boys of age around 25 come single to Japan. Once they like Japan they want to stay here for long for which I am seeing a trend that they are seeking life partners within Japan.

Many region-based Indian communities are active in Japan like the Tokyo Marathi Mandal, Tamil Sangham, Odisha community, Bengali community and so on. Hindu Swayamsevak Sangh is also very active in Japan. Japan is prone to natural calamities. Many Indians left Japan after the large earthquake in 2011. Learning from those lessons, the newly formed All Japan Association of Indians (AJAI) is trying to put up a national framework or network to offer social support, information to all Indians across Japan. As routine life becomes complex, people need all sorts of information and help spanning legal, medical/health, childcare, education, social and other areas.

As of end of year 2018, there were around 39,000 Indians in Japan comprising of approximately 10000 engineers, 2000 students, 6000 skilled labour, 500 entrepreneurs and business managers, 500 teachers, 300 plus diplomats, around 3000 on short term visits and rest are family, dependents and other categories. The Indian community started its journey to Japan in the Meiji Era and started building up in the Showa era mainly through the businessman community, grew its presence through the IT population in the Heisei Era and will now become a part of the local Japanese community in the Reiwa Era. Japanese and Indians are coming closer than ever.